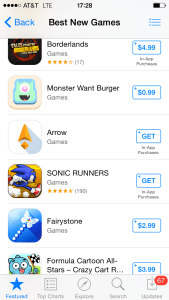 Not only that, we’re featured in “Best New Games!” At its core, Monster Want Burger is an extremely cute game where you make burgers for a hungry monster. We’ve added a lot of cool little features, including a custom burger naming algorithm. But probably the most important thing is how many “firsts” we had with this game. Monster Want Burger is:

Thanks for being with us for so many first time events. Go grab Monster Want Burger now on iPhone or Desktop! And if you can, help spread the word!